Yume no Yō na (夢のような Like a Dream) is the second ending theme song of the Dr. Stone anime. It is composed and performed by Saeki Yusuke. Yume no Yō na debuts in Episode 14 of the anime.

It's OK, even if the story sounds like a dream
Let me hear it again

If yesterday ended, today will end, too
That's just a rule that someone decided
Even a 100 million years, if we decide that's only one day away,
Doesn't it sound like we can get there quick?

It's OK, even if the story sounds like a dream
It's more realistic than not knowing, or giving up
Let me hear your voice once more
That feeling will never change and will be waiting for you

NOTE: While the English translation is good as far as getting the gist of the song down, there is a English cover by USO Squad (https://www.youtube.com/watch?v=oqC-nqevR0s) that might be better.

That story you tell, that sounds just like a dream
Will you please repeat it for me

If yesterday is past and done, today will pass by too
Someone decided that idea would be the rule
If we decide a million years is just a day away
It makes getting there fast a possibility

There will always be things that stay the same
As time moves on through every season
Those things we know will never change!

That story you tell, that sounds just like a dream
And I know how I feel so I don’t care if it’s real,
Just keep moving on
Let me hear it again

The way I feel down to my core
I’ll be waiting for you. 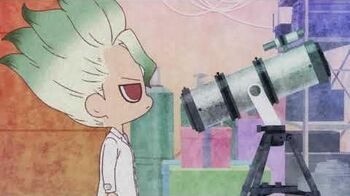 Retrieved from "https://dr-stone.fandom.com/wiki/Yume_no_Yō_na?oldid=31519"
Community content is available under CC-BY-SA unless otherwise noted.