This article is a stub. You can help the Dr. Stone Wiki by expanding it.

Yakov Nikitin (ヤコフ ・ニキーチン, Yakofu Nikīchin) is a character in the manga Dr. Stone. Yakov was the doctor on board the International Space Station (ISS) alongside his wife Darya Nikitina. While in space, he witnessed the petrification of all human life on Earth's surface from the ISS. He later founded Ishigami Village.

Yakov was a tall, buff man. He had blonde, spiky hair and beard.

Yakov was a quiet and timid man. He was the kind of person who thought with logic. According to Darya, he was a hard man to completely freak out.

He is one of six humans to avoid the Petrification due to being on the ISS at the time.

He and Darya were lost at sea when trying to reach the mainland to get antibiotics for Connie.

Yakov was shown to be quite good at complicated calculations. 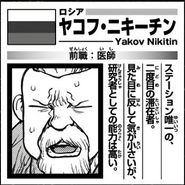 The only one in the crew who has worked in the station for a second time. While he is rather timid, his ability as a researcher is definitely top notch.
Add a photo to this gallery

Retrieved from "https://dr-stone.fandom.com/wiki/Yakov_Nikitin?oldid=17138"
Community content is available under CC-BY-SA unless otherwise noted.