In order to win the coming battle without shedding any blood, Senku and friends decide to infiltrate the Tsukasa Empire and install a secret hotline! But who will answer the first crucial phone call?! Meanwhile, the Kingdom of Science is hard at work on a steam engine for their motor vehicle! It's time to bring the industrial revolution to the stone world! 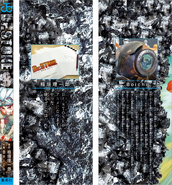 Volume 8 was published on December 4, 2018, during Japans Tankōbon ranking period of 3rd to 9th December 2018. Dr. Stone Volume 8 ranked 19/50 during that period selling an estimated 59,929 Tankōbon copies during its first week on sale.[5]