View source
watch 02:07
Spider-Man: No Way Home Trailer Dropped - The Loop
Do you like this video?
Play Sound

Tale for the Ages

Tale for the Ages

Tale for the Ages (幾千年物語, Ikusen-nen Monogatari) is the fifth volume of the Dr Stone manga

The Grand Bout Tournament to decide the village chief has begun! Standing in the way of Senku's Kingdom of Science is the powerful warrior Magma, who's facing Kinro in the opening match. Kinro's bad eyesight gives him a decided disadvantage, but thanks to the power of science, a pair of glasses might just be the thing to tip the scales in his favor!

An example of Kohaku's Gorilla Strength

Why Suikas watermelon mask has no stripes

Senku explains what the village eats 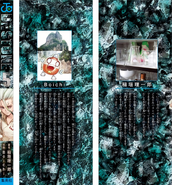