Where Two Million Years Have Gone (２００万年の在処, Nihyakuman-nen no Arika) is the third volume of the Dr. Stone manga

IMAGINE WALKING TO A WORLD WHERE EVERY LAST HUMAN HAS BEEN MYSTERIOUSLY TURNED TO STONE...

Upon arriving at a primitive village, science fanatic Senku schemes to recruit the villagers to help him bring about a new civilization based on science! His first target is a young, inquisitive villager named Chrome, whom Senku wins over by defeating him in q science battle of wits. Their first big task? To find a cure for Kohaku's older sister and the village shamaness - Ruri! 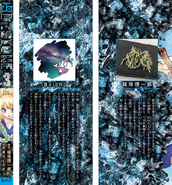 Add a photo to this gallery

Volume 3 was published on December 4, 2017, during Japans Tankōbon ranking period of 4rd to 10th December 2017. Dr. Stone Volume 3 ranked 16/50 during that period selling an estimated 48,180 Tankōbon copies during its first week on sale.[2]

Retrieved from "https://dr-stone.fandom.com/wiki/Volume_3?oldid=11032"
Community content is available under CC-BY-SA unless otherwise noted.