Two Kingdoms of the Stone World

Ishi no Sekai no Futatsu no Kuni

Two Kingdoms of the Stone World

Two Kingdoms of the Stone World (石の世界の二つの国, Ishi no Sekai no Futatsu no Kuni)​ is the second volume of the Dr. Stone series.

Now that Taiju and Senku have been able to free Yuzuriha from petrification, they’re going to have to move fast if they want to outwit and outrun Tsukasa. But how can they fight against a guy who took out a pack of lions bare-handed?!

Senku’s got the brains but lacks the brawn. Taiju’s stamina is endless, but he’s a pacifist. And Yuzuriha’s still a bit dazed from her petrification. The only solution Senku can think of is to speed up civilization process by a couple million years in order to re-create... gunpower! And it’s a good thing they've got a headstart because Tsukasa’s already figured out what they’re trying to do and where they’re heading.

Can Senku outsmart Tsukasa? Or will Tsukasa’s overwhelming martial strength be too much to handle? The showdown between Senku and Tsukasa with humankind’s revival at stake begins!

Senku, Taiju and Yuzuriha are well on their way to crafting gunpowder when they spot smoke far off in the distance. Convinced that it's a sign of other humans, Senku takes a huge risk by sending up a smoke signal of his own. Meanwhile, Tsukasa is determined to stop Senku from making gunpowder, and his arrival on the scene could spell the end for our heroes!

A comic about Senku's childhood

A comic about Senku's childhood ENG

A comic about Taiju's Childhood

A comic about Taiju's Childhood ENG

A Q&A with Senku

A Q&A with Senku ENG

Another Q&A with Senku

Another Q&A with Senku ENG

Senku getting annoyed by the splint for his neck 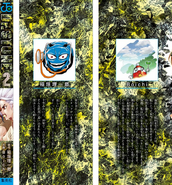 Volume 2 was published on September 4, 2017, during Japans Tankōbon ranking period of 4rd to 10th September 2017. Dr. Stone Volume 2 ranked 14/50 during that period selling an estimated 50,088 Tankōbon copies during its first week on sale.[5]