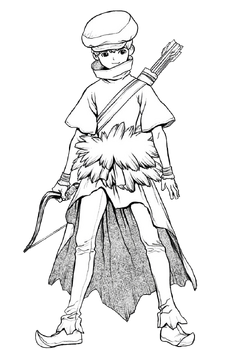 He is pacifistic and dislikes needless bloodshed. While he initially joined Tsukasa's Might of Empire as he believed it to be the only way of survival and looked away from Tsukasa's breaking of statues (which is the equivalent of murder) he chose to side with Senku and his kingdom of science under the condition not a single life would be lost. When Senku fulfills his promise, Ukyo fully sides with the Kingdom of Science. He is notably intelligent, managing to quickly deduce that the Lilian talking over the telephone was Gen in disguise and managing to keep Senku's allies alive while they were in the Empire of Might without alerting Tsukasa's suspicions. He also prefers to use his archery to corner his opponents rather than outright murder them though may be willing to murder if forced to.

Super Sensitive Hearing: as a result of his long career as a Sonar Technician inside SDF Navy, Ukyo now has extremely sensitive hearing which allows him to locate a target with pinpoint accuracy by sound alone.

Archery skills: He has tremendous skill with archery, managing to shoot arrows at Magma and Chrome that made it look as if he was trying to pursue them, but purposely shooting so they would hit close to their bodies but miss. In addition, he was skilled enough to shoot an arrow to save Chrome from falling in a waterfall.

Retrieved from "https://dr-stone.fandom.com/wiki/Ukyo_Saionji?oldid=10939"
Community content is available under CC-BY-SA unless otherwise noted.