Episode 12
Sulfurina is the name of the embodiment of the Emerald Green Spring, a hot spring that emits a deadly poisonous gas consisting of hydrogen sulfide and sulfur dioxide. The group has to tread to retrieve sulfuric acid from the spring to make the aspirin to cure Ruri of her illness. Silver can be used to detect hydrogen sulfide to see where the poison gas is and to avoid it.[1]

She is not a real being but her illusionary representation has her looking like a beautiful goddess in white dress, long emerald green hair and eyes, white wings and bare feet, but quickly turns into a gross, distorted melting face and even a black skeleton demoness when people get too close and die from her gas.

She is not a real being but has the appearance of a beautiful benevolent goddess that lures people in but once they get too close to the poisonous gas she emits, she reveals her true colors as a vicious demoness ready to swallow and murder anyone who gets within her clutches.

Her poisonous gas is capable of killing anyone who comes too close. The only chance of avoiding her gas while treading her territory is to wear a gas mask (made by Senku) though one must remain calm as hyperventilating and breathing too much and panicking will cause a quicker loss of breath than the gas mask's ability to purify the air. 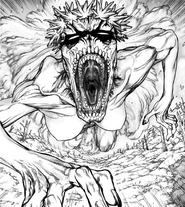 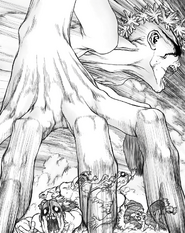 Add a photo to this gallery

Retrieved from "https://dr-stone.fandom.com/wiki/Sulfurina?oldid=22735"
Community content is available under CC-BY-SA unless otherwise noted.