Episode 1
The Stone World is the setting for Dr. Stone. Roughly 3700 years after the initial Petrification event, the world has become a much harsher, wilder place where human progress has been virtually reset.

The Stone World refers to the state that the Earth has assumed 3719 years after the petrification of mankind. Nature has taken over, and the only known active civilizations left are Ishigami Village and Treasure Island. There are statues of the petrified humans scattered across the area. Senku Ishigami is the first known pre-petrification human to live in this "era".

Due to Tsukasa reviving several people, the Tsukasa Empire appeared and consisted wholly of modern humans. After the Stone Wars, the two empires have merged and reached a grand total of 150 people, both modern and stone world.

It is later revealed that there is an American Colony that exists in San Francisco, which revived at the same time as Senku one, but is more advanced.[1]

Following the second Petrification Event, humanity was petrified until Suika revived. For many years, Suika worked on the revival formula and succeeded by 5749. After the revival of the Kingdom of Science, they ultimately revived more people and created the first city in thousands of years.[2] With the revival of more people in Spain and India as well as those on treasure Island the Stone World is more populated.[3]

Due to the petrification event, a majority of the world was greatly warped. Once-great monuments were destroyed and what remained of the modern world was gone. It was shown that because of the lack of human activity, animal population grew and forests cover most of the areas.

What remained of humanity exists in the descendants of the six astronauts who founded Ishigami Village, but a branch went off to inhabit Treasure Island.

Prior to the present, several objects later called the Petrification Weapons fell from the sky. A majority of these were collected by brigades which were destroyed by a warrior that soon lost his life, but his servant Matsukaze carried on his work. Wanting to warn future generations, Matsukaze got himself petrified.[3][4]

In the year 5736, the Petrification Weapon was used by Kirisame and Mozu against Amaryllis and her four friends to prevent them from fleeing the Island. Amaryllis managed to survive but had a desire to liberate her island.[5]

Foundation of the Kingdom of Science

After depetrifying, Senku Ishigami discovered the world as he knew had changed. Having kept count of his time petrified, Senku estimated roughly 3700 years have passed and he was in the year 5739. Marking the year on a tree, Senku decided to find a way to survive.

In a matter of months, Senku recreated a lab, clothing, and the antidote to the Petrification. On October 5, 5738, he revived his childhood friend Taiju Oki and they worked together for a while.[6] Soon they revive another childhood friend Yuzuriha Ogawa but a problem arose with the revival of Tsukasa Shishio. Tsukasa sought to revive the young and less fortunate rather than the old and greedy.

Tsukasa attempted to bargain with Senku on giving up Science but Senku refused. Seeing this, Tsukasa requested the revival formula and seemingly killed Senku.

However in truth, Senku was not dead and faked his death. He had his friends return to Tsukasa to act as spies for him.

Subsequently, he found a village were primitive humans were living. After much time living among them, he found himself the chief of the village. He also discovered that the village was founded by his father Byakuya Ishigami and his astronaut team (who survived petrification) with the humans there as their descendants.

Realizing Senku might be alive, Tsukasa started to revive more people, leading to the creation of the Tsukasa Empire or Empire of Might.

Tsukasa sent the mentalist Gen Asagiri a spy to infiltrate Ishigami Village but the latter defected to the Kingdom of Science.

The first battle soon to place between the Empires occurred after Tsukasa sent his top Lieutenant Hyoga to wipeout the village. However, Hyoga was forced to retreat because of the Kingdom's developing weapons to combat them but not before having the village burned down by his right-hand. Hyoga reported to Tsukasa of Senku's survival, this officially set the path of war in motion.

Sometime after the war, the Kingdom of Science decided that they must gather a way to secure more ingredients to create unlimited revival formula. They decided to travel the world and revive everyone petrified. They revive an experienced sailor and his associate to build the most amazing ship to travel the world.

During this test run, they created the motorboat and hear the transmission of a person asking “why”.The sign that there are other humans out there.

Working together, the Kingdom got to work and made more advancements to the Stone World: such as the recreation of clothing stores, GPS, metal detectors, and paved roads. They also brought back traditions like Valentine’s Day after several months completed their ship. In the year 5741, the Perseus was constructed and they set sail for Treasure Island, the island where the astronauts originally landed on Earth.

While on the Island, they discover that there exists another civilization of primitive humans called the Petrification Kingdom who were under the thumb of a tyrant named Ibara who secretly ruled from the shadows. It also turns out that one of the Kingdom Science's villager Soyuz came from the Island and told them of a weapon that petrified people. Indeed, Ibara used the Petrification weapon to silence anyone, including the original leader.

Ibara had lackeys petrify most of the Perseus' crew and engaged Senku after his crimes were exposed. However, Senku outwitted the old leader and petrified Ibara. The Petrification Kingdom was liberated coming under the possession of the leader's son Soyuz while allying with the Kingdom of Science.

Matsukaze is also released, being able to carry out his mission by telling her history of the weapons. He subsequently joined the kingdom, as a new Warrior. [3]

The Kingdom of Science gathered a new weapon and learned of an ominous threat called the Why-man, who had previously been enigmatic to them before. They learn Why-man is on the moon, deciding to travel the world and gather materials for space travel.[7]

The Perseus sails for America after they successfully save Tsukasa and gather more warriors to join the cause.[8][4]

Soon they arrive in San Francisco, where the once great city is shown to be in the same state as the world. The crew travel the area and hunt attacking wildlife to restock up on supplies.[9][10] Soon they discover corn before they come under attack by a unseen revived human who has recreated guns and cigarettes.[11]

The unknown attacker is revealed to have re-create an aircraft. Despite heavy attacks, the aircraft is brought down by the Kingdom of Science to proceed to salvage the downed plane. It is also revealed that there are even more Americans who were revived as the attacker is in contact with others who is skilled in Science like Senku.[12] The American Colony inhabit a large fortress, which was created by the scientist Dr. Xeno.[13] Xeno's colony consists of a former military soldier Stanley Snyder, the same attacker on the Kingdom of Science and few dozen others.[13] However, despite the capabilities of Stanley and others, their numbers are lacking because they do not know of the Revival Fluid.[14][15]

Much later, the groups both send one of their own to infiltrate the other. This results in Senku nearly being sniped, while Chrome organizes a successful attack in which Xeno is captured.[16][17] [18]

Senku and his group commandeered one of the American ships in the escape. Knowing that the enemy has their ship, Senku uses a trump card. He negotiated with Dr. Brody for a truce and offers the ingredients for the revival formula and his plans to free over a million people. By doing this he hopes to create the first city in the Stone World.[18]

Brody contacts the crew of the Perseus and after a tense talk, the alliance formed but Brody was (correctly) aware Stanley would most likely hunt Senku and his group.

Senku and his group set sail for South America where they hoped to find the cause of the first petrification that occurred thousands of years ago. It was also shown that Xeno was aware of the Why-man and his presence on the moon.[19]

After a long trek to the Amazon rainforest, the science group discover a pyramid made out of the petrification weapons which are completely drain of powers. [20]

The Science group later contact their allies in America to activate the Petrification Weapon after they recently recharged it. Despite the many casualties from the American forces, they were able to reach the device and petrify the entire world once more. [21][22]

Three years later, Suika is revived, making her the only known human in the world. Suika uses her survival instincts to fend for herself until she can find a way to revive her friends.[23]

Suika collects her petrified allies, while continuing to fend for herself. Soon enough, she finds a paper holding instructions for the Revival Fluid and starts gathering supplies. She ultimately succeeds and Senku is revived.[24]

With establishing of Superalloy City, as well as the revival of several people, the population expanded. [2]

Great Buddha, one of the remaining monuments of the Pre Petrification world.

Roppongi Hills Mori Tower, another of the remaining monuments of the Pre Petrification world.

Ishigami Village, one of the Stone World human colonies.

Tsukasa Empire, one of the new human colonies. 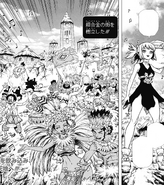