Patrick Seitz
Shamil Volkov (シャミール ・ヴォルコフ, Shamīru Vorukofu) is a character in the manga Dr. Stone. Shamil was a Soyuz Pilot on board the International Space Station (ISS). He arrived alongside Byakuya and Lillian as the new astronauts to the ISS. While in space, he witnessed the petrification of all human life on Earth's surface from the ISS.[2]

His personality was the opposite of Byakuya's. Byakuya considered him similar to Senku. He was often stoic, serious, pragmatic, and considered himself a loner. A man of few words, he preferred to remain active and practical in his actions, looking to work and eschewing typical pleasures such as food for more efficiency in his career.[2]

At the end of his life, he considered himself lucky to have had the life he'd had, citing his wife and children to be the best possible outcome of the apocalypse he'd survived. In the end, he credited Byakuya with having brought the fun and levity that he used to get by all those years. Shamil, despite his seriousness, was a surprisingly gentle and sentimental man, having taken pause to mourn the death of his wife, Connie, at her graveside.

Surprisingly, despite his serious demeanor, Shamil was very musically talented, playing the drums for a record saved for future generations.

Shamil is introduced as a man of serious and hardworking character. He first complains about Lillian's playful behavior and Byakuya's unseriousness once the latter offers him a pack of ramen. He refuses Lillian's offer to call anyone he considers close, saying that there's no need to as he is single.

Having eventually been provoked into trying to food, Shamil is the first one to observe a huge beam of light covering Earth's surface. Desperately attempting to establish contact with the rest of humanity, Shamil informs the rest of the group that neither NASA nor Ros-Cosmos are responding to his calls.

Once Byakuya connects to the internet, Shamil and the rest of the crew witness the outcome of the light - the entirety of humanity being petrified. As Yakov suggests wating for someone to rescue the ISS group, Shamil refutes this hope by saying the state of mankind as it is now offers them no chance of rescue.[2]

As the group prepares to take a trip back to earth, Byakuya volunteers to take off by himself. Shamil disagrees with this, saying that the group won't have enough vessels once he departs. Shamil then punches Byakuya in the stomach, berating him for wanting to risk his life despite having a son. He, along with Connie and Lillian makes an inaccurate landing on the ocean instead of ground, contacting the rest of the crew that they have limited supplies to survive. They are rescued shortly after by Byakuya, who finds their vessel after 10 hours of search.

3 years later, Shamil and Connie have gotten married. The ever gleeful Byakuya loudly congratulates the pair on their wedding, with a grateful Shamil telling the former that there is no need for excessive ceremony, given the current conditions they are living in.[3]

As his wife eventually succumbs to pneumonia, Shamil mourns his loss. Not too long, he contracts pneumonia, Lillian and Byakuya start tending to him as his condition worsens. Shamil takes note of how even Byakuya has a depressed expression, calling him out on his previous claims of having fun even in dire situations. The former states that he did have fun, ever since the day the crew went to space together, never imagining to have a family before. Shamil adds that there's something he hasn't told Byakuya yet - the ramen he was given by Byakuya just before the petrification event was delicious, enough to make him smile. A crying Byakuya responds that he believes humanity will once again reach the point where they can eat ramen in space. Shamil too passes away from pneumonia, leaving Byakuya and Lillian the only astronauts left alive.[4]

When Byakuya decides to make a record out of glass, he recommends they search for tools to help them in the Soyuz capsule. 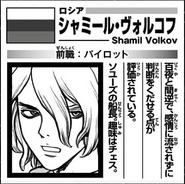 While his personality is the exact opposite of Byakuya's, he is highly regarded for his ability to make a decision without being influenced by his personal feelings. Commander of Soyuz. His hobby is Chess.