Senku Ishigami (千空, Ishigami Senkū) is the main protagonist of Dr. Stone, and is friends with Taiju Oki and Yuzuriha Ogawa. He is known for his catchphrases, one of which is "Ten Billion Percent" (chapter 1 p6 p44). He was de-petrified half a year before Taiju, and eventually created the Stone Formula with Taiju's help (chapter 41 p19). In the Z=1 Stone World, Senku wants to rebuild civilization and establish a Kingdom of Science.

He was the first-prize champion in the village games, and currently holds the title of Village chief in Ishigami Village. 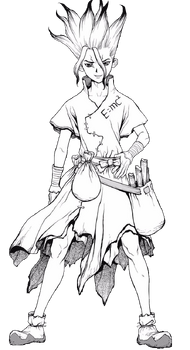 Ishigami Senku is a young male with an average build. His characteristic hair has two bangs going across his eyes and the rest sprays up, like a plant. His hair is a light, dirty blonde with dark green tips. He has red eyes. After his de-petrification, he has two diagonal marks reflected against each other on top of the beginning of his eyebrows.

His clothing remains the same. Before the Stone Apocalypse, he wore his school uniform. In the Z=1 Stone World, he switched to wearing animal skin clothing in a rudimentary manner. After Yuzuriha's de-petrification, he gets a clothing redesign. He wears the same animal skin, but this time in a caveman style, patched up in a better manner. Einstein's formula of energy (E=mc^2) is printed across the front of his clothes, serving as a "motto".

Senku has an over-the-top attitude that comes in the form of comedy and leadership. He is confident in himself and has the ability to back it up. Even so, he never lets his confidence clouds his judgement or belittle those around him. Rather, he serves as a source of encouragement and inspiration to everyone around him. Because of his wits and his caring nature, people tend to gather around him colleagues and supporters alike. Although he has a strong sense of justice, he doesn't let the rules dictates his actions and can be cunning at times to get what he wants.

Ishigami Senku is a genius with a vast amount of scientific knowledge. He is able to invent various kinds of tools and gadgets in a short amount of time with ease. As a child, he designed and built a functioning miniature rocket ship. Senku also possesses an analytical mind, being able to correctly discern the situation he is in. Even in his pre-teens, he was intelligent and sharp-minded enough to create advanced machines.

Senku has no outstanding physical traits, and he would lose against someone like Kohaku in a brawl, something he himself admits.[1] He is also very vulnerable to hypothermia, only being able to withstand cold water for a short amount of time.