Senku Ishigami (, Ishigami Senkū) is the main protagonist of Dr. Stone, and is friends with Taiju Oki and Yuzuriha Ogawa. He is known for his catchphrases, one of which is "Ten Billion Percent".[5] He was de-petrified half a year before Taiju was, and eventually created the Stone Formula with Taiju's help.[6] In the Stone World, Senku wants to rebuild civilization and establish a Kingdom of Science.

He was the first-prize champion in the village games, and currently holds the title of Village chief in Ishigami Village, where he is widely a legend thanks the late-Byakuya’s influences through out his founding village’s community. 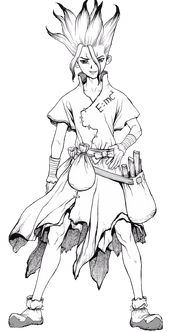 Senku is a skinny young man with white (light green in the anime,) brush-like hair that spikes up, with two locks of hair that drape over his face, and red eyes.  Kohaku admitted that he looks like a "lady killer" to her, implying he is handsome.

His stone markings are two, symmetrical diagonal lines on top of his inner eyebrows.

Pre-Stone World, he wore a typical school uniform with a lab coat over it. After waking up in the Stone World, he switched to wearing animal skin clothing in a rudimentary manner. After Yuzuriha's de-petrification, he gets these clothes patched up in a better manner. He has Albert Einstein's mass–energy equivalence formula (E = mc2) written in his own blood across the breast of his shirt.

Senku is a straight-forward, confident and highly logical individual who can come off as arrogant. Even so, his borderline-overconfidence does not cloud his judgment, as he is often backed up by his superior and vast knowledge of science. Senku never belittles those who are less knowledgeable than him. Rather, he encourages and inspires everyone around him to do better. Because of his charisma and caring nature, people tend to gather around him, both allies and supporters alike. However, he can act over-the-top at times when he is excited over a creation or at the discovery of something new.

Senku has a very logical mind, believing that there is nothing science cannot explain, even if it takes a long time for science to properly understand any one thing.

Although he has a strong sense of justice, he often bends the rules, withholds information, and manipulates others to get what he wants, but if only for the better of his allies. He often acts as if he builds inventions and uses people for his own interest (such as glasses, and the automobile), but beneath his arrogance and manipulative nature lies a genuinely selfless and kind heart.

Unlike Taiju, Senku seems averse to the idea of romance. He seemed disturbed when Kohaku worded her praise for him strangely, claiming she had "fallen for him." In addition, he was completely unaffected by Amaryllis' attempts to charm him, much to her chagrin. He believes a brain filled with love is most illogical, but he does support his friends, such as Taiju's relationship with Yuzuriha, and Chrome's relationship with Ruri. Despite all this, Gen believes that one day, after all the conflict is over, he may consider the idea of romance.

What Senku lacks in physical ability, he more than makes up for with his determination. He counted the time he was petrified to the last second for nearly 3 millennia, and willingly faced death by Tsukasa's hand because of his refusal to end his science and to protect Yuzuriha without being fazed. Senku is simply someone who refuses to give up on a task no matter how arduous.

Senku Ishigami is a genius with an encyclopedic knowledge of all things scientific. He is well versed chemistry, physics, engineering, geology, biology and mathematics. Senku is able to easily create various useful tools and gadgets, medicine, and most notably, the de-petrification elixir, despite the limited materials of the Stone World. As a child, he designed and built a functioning miniature rocket ship, alongside many other advanced and experimental machines. However, Senku doesn't compare to a master craftsman like Kaseki, in terms of building skills, as Kaseki has far more experience than him. In addition to his scientific knowledge, Senku also possesses great resourcefulness and an analytical mind, seemingly never having a shortage of options at his disposal. For whatever he lacks, he has an ally who can offer their strength. He also possesses great mental fortitude, able to think quickly on his feet and keep his cool in the most dire of situations.

Though arrogant and eccentric, Senku seems to have a good understanding of people and how they think. He uses his many creations to charm those who were suspicious of him (like ramen, glasses, and medicine) to slowly warm up to around him. Senku is also a capable leader, who is good with his words, able to motivate and lead the villagers into an effective army against Tsukasa's Empire of Might. He has personally gained the loyalty and respect of his allies (and enemies) through his hard work and determination.

In addition to his scientific intelligence, he appears to have some skill as a strategist. He managed to coordinate the villagers and even some of Tsukasa's army whom he converted to his side in an effective bloodless war against Tsukasa's Empire of Might. Similarly, he managed to have Kohaku, Ginro, and Amaryllis infiltrate the chief of Treasure Island's harem as spies and managed to communicate with Kohaku and develop a strategy to cleverly gather the scattered petrified pieces of his friends along with the precious stones from the Soyuz chamber.

Senku is below average in terms of physical ability, lacking physical strength. He was unable to hold Homura, a petite woman shorter than 5 feet, after managing to grab hold of her. He also admitted he wouldn't stand a chance against someone as strong as Kohaku in a fight (although it's not really a fair comparison, given how strong she is).[7] In a bonus chapter, Kohaku gives small description on the physical abilities of the main characters. Senku is at the bottom at around 3 points, Chrome at 5, Ginro at 100, Kinro at 500 and Kohaku herself at 1000. Similarly, Senku has poor stamina, and tends to get physically exhausted rather quickly. He is also very vulnerable to hypothermia, only being able to withstand cold water for a short amount of time.

While not bad in terms of craftsmanship, he lacks the natural talent in it. It took him several months to learn how to do pottery, and even then, it could only be considered decent. He also failed miserably at making glassware, and for more detailed and intricate objects, requires expert craftsmen like Kaseki to make them. He also requires Yuzuriha to piece together the broken stone statues as he lacks her talent and precision.

While not a weakness per se, he is not an exceptional cook. He is shown to know how to cook, but lacks experience and quality ingredients. While he knows the process of how to make food, most of the time the more complicated food does not taste good. While he was able to make cotton candy and cola, more complicated foods, such as wine, ramen and bread proved to be terrible tasting. While in the ramen's case, part of it was due to not having the exact ingredients (he used foxtail to make flour instead of wheat). When he tried to create bread with all of the proper ingredients on hand for the first time, it came out so horrible that no modern person was capable of eating it (though the Ishigami Village tribe loved it because they have only ever eaten fish and never tried bread before).

Senku is allergic to lacquer. It causes his face and lips to swell up dramatically.

Throughout the series, despite his high intelligence and ability to overcome obstacles, he tends to run into trouble often due to his horrific luck. Gen at one point quips to Senku (while they are trying to make gunpowder to stop Tsukasa's army and fail) that Senku always has crappy luck. In the Petrifiaction arc, where he goes to Treasure Island, after all their resources and options have been exhausted as he and the Kingdom of Science are cornered by Ibara, Mozu, and their army, Senku is even forced to use his worst trump card: reviving Hyoga (a rather unpredictable and cruel man willing to manipulate and kill anyone who gets in his way) to have a fighting chance against Ibara and Mozu despite the strong possibility Hyoga will immediately overpower the Kingdom of Science and/or learn of the petrification device afterwards. Later on, Ibara would use the petrification device to petrify everyone but himself.

Retrieved from "https://dr-stone.fandom.com/wiki/Senku_Ishigami?oldid=16053"
Community content is available under CC-BY-SA unless otherwise noted.