View source
watch 02:07
Spider-Man: No Way Home Trailer Dropped - The Loop
Do you like this video?
Play Sound

Chapter 84 (Construction Begins)
Chapter 100 (Construction Completed)
Chapter 200 (Rebuilt)
The Perseus (ペルセウス, Peruseusu) is a ship built by the Kingdom of Science to travel the world, establish new cities, and most importantly solve the Petrification mystery. Designed by Senku and Ryusui, the boat was built over the course of a year using the extra manpower gained from the Tsukasa Empire. Its construction was the major focus of the Age of Exploration Arc, and was completed on September 10, 5741. In 5749, after the second Petrification Event, the Perseus was abandoned and ultimately sank. It was recovered and the Science group salvaged the hull on it. Senku announced they were going to rebuild and improve the ship with better materials.

The Perseus appears to be a modified brig, altered to fit a motor and require less crew. It has the traditional two square-rigged masts, with three sails set vertically on each. It lacks a gaff-rigged fore-and-aft sail, its position at the back of the ship replaced by a tower of exhaust pipes. There are two jibs at the front. The deck is flat the whole length of the ship, with a raised section towards the back for the comms room and exhaust pipes, and another raised section for the glass ceiling on the greenhouse. The very front has three short tiers upwards. At the back, it has a rudder and two propellers on the hull and the original motorboat ready to be deployed on cranes hanging off the deck.

The bow of the ship is painted to look like a face, possibly a heavily-stylised version of Perseus himself acting as a figurehead. The ship is mostly made of wood with metal plating towards the front and angled panels along the bottom. The number of portholes on the main part of the ship varies between eight and ten, sometimes not being drawn at all, but the comms room usually has three.

Originally, the boat was going to be much larger and able to carry more people, however due to warping issues that Kaseki was unable to overcome, Senku believed they would be forced to change plans and build a smaller sailboat with limited crew. Ryusui then stepped forward, saying he could build a 1:48 scale model of a motorised sailboat which could be scaled up and used as a reference for the big one. Kaseki and his team were then able to modify and finish the Perseus.[1]

The Perseus is built for speed and cargo, akin to merchant vessels, however the cargo is science and exploration equipment. It has antennae (radar and GPS) for communicating with Japan and searchlights installed on the two masts. Rather than going with the usual rope rigging design to orient the main sails, the front mast sits on a gear that can be rotated using the engine. In order to handle the extra stress on the mast, the base is heavily flared, however it is also hollow and has a door leading to stairwell inside. Within, it has several rooms with dedicated purposes. Starting from the front:

The hallways aboard the ship are much larger than the hallways on most modern ships and have handrails on both sides. All the doors are also watertight, shown with locking wheels on the front.

During the long trip to North America, Ryusui wanted to improve the crew's lifestyle as choosing the shorter route meant extra rations. He did so by adding a casino (Perseus Luck Casino) and a bar (Bar Francois) to the deck of the Perseus. The casino takes up most of the front of the deck, with the bar right at the tip on a slightly raised platform.[2]

The casino's dedicated tables are later thrown off the deck by a heavy storm, leaving only the entryway sign and bar shelves.[3]

After Kirisame brings down one of the American Colony's planes and Senku retrieves it, they start work on remodelling the Perseus to function as an aircraft carrier.[4] The remodelling involved cutting down both masts, shortening the bow sprit, dismantling the greenhouse, raising the deck and extending it on the starboard side to avoid the comms room and building a catapult for launching the plane. The raised deck is on fence walls, allowing airflow and for sunlight to reach the old deck.

It is unknown if they altered the engines at all or if the speed and manoeuvrability of the ship has been heavily affected.

When Stanley and his unit commandeered the Perseus they outfitted with weapons such as machine guns.

Having sunk during the 7 years everyone was petrified for, a new ship was needed for the Kingdom to continue traveling the world.[5] This time, rather than being a sailboat, the engine uses the same concept as the rocket engine they were designing. This made it go much faster, with 10,000 horsepower and a speed of 20 knots.[6] For fuel, the ship uses liquid gas derived from biofuel, which consists of leaves, food, scrap, and manure.[7] The apparatus for collecting and storing the gas can be found on the deck of the ship.

Feature upgrades include an air conditioning unit, and a freezer.[8] The Mobile Lab was also rebuilt.[9]

After defeating Tsukasa and his empire, Senku and the Kingdom of Science set their sights on discovering the cause of the Petrification. Believing that the answer to this mystery lies in South America, they begin to develop a ship capable of crossing the Pacific Ocean.

Senku develops the schematics for the Perseus. (Several other members of the Kingdom of Science develop alternative concepts, including Yo and Magma.) Ryusui leads the construction of the project, ultimately becoming its captain upon completion. The construction of the ship takes approximately a year to complete.

On the year 5741, it is finally complete and sets sail to Treasure Island.

During its time on Treasure Island, it is attacked by Kirisame, resulting in most of them being petrified. It is subsequently ransacked by Ibara and his forces, while left ashore by them. In the midst of the final battle, the Perseus served as a setting until the island was petrified.

Following the defeat of Ibara, the Kingdom of Science regain their ship and fix the damage done by Ibara. They receive a transmission from the Why-man and deduce he's on the moon, with Senku deciding to sail the Perseus across the world to gather materials and travel to space.[10] The crew gain two new members Kirisame and Matsukaze, while Soyuz stays and becomes the leader of Treasure Island. The Perseus leaves the island after making Treasure Island a part of the Kingdom of Science.[11]

They sail back to Ishigami Village where they revive Tsukasa, before they set off for America.

After forty days of sailing, the Perseus arrives in San Francisco, where they divide into two groups with the warrior team following the exploration crew and the rest stay with the ship. [12]

After salvaging a plane from a recently revealed American Colony, the crew began to work on making a runway on the ship to battle the enemy. Several days, the crew worked while a spy came aboard.

The crew were distressed when an attempt on Senku's life was made by Stanley Snyder. Fortunately the young scientist manage to survive by creating a bullet proof vest but he was a wounded from an after shock. The crew to send it to him while he was on bed rest well continuing to create the runway more determined than ever to pay the enemy back. Soon the runway was completed and the new plane was able to launch.[13]

With Stanley approaching, the crew had the plane take flight, causing an aerial battle to take place.[14] While the crew were distracted by the battle taking place, they were left unaware of that the American Colony had a submarine laying in wait. The submarine attacked, causing much damage to the ship before they were attacked by the members of Stanley's unit and rounded up.[15]

Stanley and his unit commandeer the Perseus, which they proceed to modify to pursue Senku and save the captured Dr. Xeno. Matsukaze is taken aboard after sustaining injuries during the attack. Determined to find Ginro, Matsukaze ignores his injuries by leaving the sick bay and finds Ginro cowering away behind the prison cage. Matsukaze takes this to mean that Ginro was spying on the enemy, which he brushes off as that being the case. As Matsukaze collapses, Ginro hides once again. Much later, Stanley and his men interrogated Matsukaze but the samurai does not speak. Seeing his friend in danger, Ginro gives away his position and reveals where Senku is heading. With this, Stanley sets a course for South America.[16]

Reclaiming the Perseus is the main priority of the Science group, as it is the only ship capable of sailing the whole world.

Seven years after the second Petrification Event, the Perseus was left abandoned and over the years rusted and sank. After reviving, the Kingdom of Science in South America started to construct Super Alloy but lacking iron, however, they decide to recover the Perseus as the hull was made of it. Once brought up from the ocean, Kaseki was saddened by the damage and vowed to replace it, but the others simply tore apart what remained. Instead, Senku told him they were planning on improving it with better materials. This news delighted Kaseki who looked forward to this.[17]

Half a year later, Xeno and Senku create superalloy, inconel, and Senku finishes his liquid fuel. They test a rocket engine near the water and it works as intended, however it is only level 1. Xeno says they'll need a level 99 engine if they want to reach the moon. After the group in South America split into three teams, it was decided the third team will continue establishing new cities across the globe, starting by crossing the Atlantic using the new, improved, much faster, Perseus. They bid a quick farewell as Senku and the other set off across the ocean once more.[18] 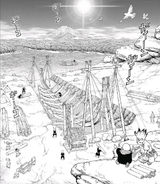 The stern, showing the motorboat winch

The stern from above 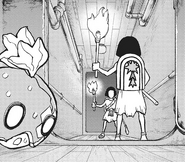 The hallways within the ship 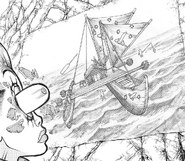