Namari (ナマリ, Namari) is from Ishigami village and is shown to be skilled at drawing.

Namari has light colored hair that covers the left side of his face. He has a yaeba tooth in some of his appearances. Namari is also relatively short compared to most of the characters. Like the other Ishigami Villagers, Namari has a rope in his appearance. His is around his neck.

Namari is shown to be cooperative whenever someone tells him to draw something, mostly because he is often forced to.

Namari is able to draw skillfully and in a short amount of time as well.

Namari is first introduced in Chapter 17 along with all of the other villagers. Namari is shown again in Chapter 34, when he is drawing the contestant match ups for the tournament. In Chapter 50, Namari draws the blue prints on how to create a cell phone. In chapter 84, Magma forces Namari to draw a ship for him, when Magma, Yo and Senku are competing to design the best ship. During Chapter 86, when Ryusui is looking to make a currency, Namari is seemingly forced to carve the stamp for the Drago. In chapter 96, Namari and the Mangaka put a sign up for the Kingdom of Science's strategy room.

Namari drawing the match ups for the tournament.

Ryusui forcing Namari to make a stamp for the Drago.

The Drago, which Namari designed. 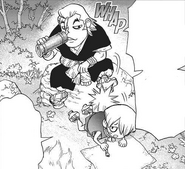 Magma forcing Namari to design a ship for him 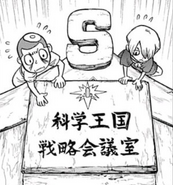 Namari placing the sign for the Kingdom of Science's Strategy Room, presumably designed by him and the mangaka.
Add a photo to this gallery
Retrieved from "https://dr-stone.fandom.com/wiki/Namari?oldid=21325"
Community content is available under CC-BY-SA unless otherwise noted.