Lillian Weinberg (リリアン ・ ワインバーグ, Ririan Wainbāgu) is a character in the manga Dr. Stone. She was a famous American songstress and NASA astronaut that boarded the International Space Station (ISS) alongside Senku's father, Byakuya Ishigami, and witnessed the petrification of all human life on Earth's surface.[2]

Lillian was a beautiful young woman with long blonde hair, tied into a ponytail with a ribbon. She shares a strong resemblance to Kohaku and Ruri, as well as many of the women of Ishigami Village, denoting her heritage as their ancestor. Whilst on the ISS, she wore white-striped trackpants, like her fellow astronauts, and a black tank-top.

After spending 3 years on the island, most of Lilian's clothes had fallen apart, leaving her in a makeshift sleeveless shirt, shorts, and going completely barefoot.

Eventually, Lillian was left in a makeshift tan dress of sorts and continued to go barefoot.

Based on her appearance and her last name, it can be assumed that she is likely of German descent. 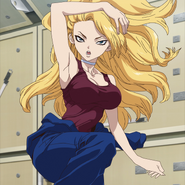 Lillian was a kind and shy young woman. She showed a bit of a playful side as well, as she briefly pretended to be a typical diva while aboard the ISS, but quickly revealed that to be just one of her jokes.[2]

She was a profound lover of music, having mourned the loss of centuries of collected compositions ranging from classical works such as Mozart to rock music icons like The Beatles. Music appears to have been a pathway to her escape from an alcoholic father.[3] From the beginning, she was a firm believer in Byakuya's belief in the importance of fun and entertainment as being crucial to the survival of humanity. She revealed to Byakuya that she wanted to unite as many people as she could in happiness with her talents, displaying a passion for the power of music over the human mind and heart.

Her conviction in this belief transcended her lifetime hundreds of times over, as her belief in the power of the human spirit inspired her to help Byakuya write The Hundred Tales, which helped her descendants to survive and maintain the flame of civilization. Her faith in humanity paid off, as Byakuya's son Senku would be remembered in legend and eventually come to Ishigami Village to lead humanity out of the Stone World.

The conversation between the spaceship members, Byakuya, Darya and Yakov is interrupted by Lillian Weinberg, who claims to be a space tourist who bought the seat on the station for 4.5 million dollars. She condescendingly belittles Yakov for not greeting her properly, greatly startling the astronaut.

However, this behavior turns out to be a ruse created by Lillian and Byakuya, and it gets accidentally broken once Byakuya bursts into laughter and the diva follows. Lillian introduces herself to the rest of the crew, with Shamil Volkov commenting she's been like this the entire trip, ordering both Byakuya and Lillian to stop laughing at last.

Byakuya and Darya then go on to set Lillian's songs in the spacecraft in order to set the "proper atmosphere" to greet the diva. Lillian is flustered by the usual playful behavior of Senku's father. Eventually, having contacted her fans from space, Lillian offers Byakuya and Shamil contact with their loved ones on Earth. Shamil refuses, saying he is single, while Byakuya mentions his son Senku who is a lot like Shamil - informing his father he is not interested in contact. Byakuya concludes that Senku is most likely wrapped in his own research as they speak.

She, along with her crewmates, witnesses a massive sphere of light engulfing the earth. Desperately trying to establish contact with the rest of humanity, Lillian suggests they look for tweets once Byakuya connects to the internet. Everyone's posting stopped at a certain point in time, with the group soon coming to see the cause - all of observable humans having been petrified to statues.[2]

Lillian goes on a mission to inspect available islands for living along with Shamil and Connie. They miss their target and end up in the ocean, but are saved by Byakuya who lands alongside Yakov and Darya. As 3 years pass, Shamil and Connie are getting married. In celebration, Lillian begins singing, only to be reminded of her hurtful past with an alcoholic father and her dedication to music. She rushes off in tears, Byakuya following after her. Once approached by Byakuya, she laments on the music of humanity being lost forever. Byakuya disagrees, saying that petrification won't last forever and that humanity isn't finished. He mentions his son, noting how he wouldn't give up and die so easily.[3]

She is next seen tending to a sick Shamil who contracted pneumonia after his wife. The latter succumbs to the disease despite the care given. As more time passes, Lillian finds Byakuya crafting the 100 tales that would enable future generations to survive and sees the message he plans to pass onto Senku. Byakuya complains about the difficulty of English language, while Lillian responds that he could write the stories in Japanese too as she always wanted to know more about his native language.

Eventually, Lillian herself likely contracts pneumonia as well and dies. She is buried alongside Connie and Shamil.[4]

After Byakuya creates a glass record for Senku, Lillian sings for the record.

Gen Asagiri plans to use Lillian's voice within the glass disc in order to fool Tsukasa's army into believing that civilization in America has already been built, and that they're coming to save Japan as well. Asagiri's plot aims to trick Tsukasa's troops into siding with the Kingdom of Science and use them to surround Tsukasa, effectively stopping his campaign.

From their introduction, it was shown that Lillian and Byakuya were quite friendly with one another, the two even setting up a prank for the other space station inhabitants. Byakuya also helped serve as a means of support for Lillian who, after spending time on the island the group was forced to inhabit, grew disheartened at the prospect that all the music humanity had created would eventually be destroyed. Yet, Byakuya helped her stay positive even as their situation continued to grow more dire.

While it's never confirmed, given her strong resemblance to Kohaku, Ruri, and some of the other young women of Ishigami Village, it is implied that she eventually married Byakuya and the villagers are their descendants.

Connie was a huge fan of Lillian's during her time back on Earth and was rather starstruck when she met her on the International Space Station in 2019.

The two became fast friends and comrades in the Stone World, with Lillian singing at her and Shamil's wedding. Lillian helped to raise Connie and Shamil's children after their deaths from pneumonia until her own death.

Upon the arrival of Shamil, Lillian, and Byakuya on the ISS, Lillian and Darya became friends, having enjoyed mutually teasing Darya's husband, Yakov. Upon returning to Earth, the two remained close as Darya and Yakov settled down and had children of their own.

Eventually, Lillian became the caretaker of her and Yakov's children after they were lost at sea and died while attempting to make it to the mainland in search of antibiotics.

Yakov had something of a rough start due to Byakuya and Lillian pranking him with her diva-like behavior upon arriving at the ISS. He was a fan of her music back on Earth and professed to having collected every album she had produced.

Lillian and Yakov became good friends and Lillian adopted his and Darya's children after they were lost at sea, caring for her close friends' children and teaching them The Hundred Tales along with Byakuya to ensure their descendants' survival. She even performed a song to be immortalized in a record with Yakov playing guitar.

The two had something of a rocky start due to Shamil's lone wolf attitude and no nonsense demeanor. The two and Connie made it back to Earth only to be rescued by Byakuya. Her belief in Byakuya's belief in fun being critical to humanity's survival eventually broke through to Shamil. She eventually had moments of fun with him by recording a song for their descendants and Senku to find, with Lillian performing vocal, Yakov playing a guitar, and Shamil joining in as their drummer.

She eventually sang at his wedding to Connie and was at his deathbed when he died from pneumonia. 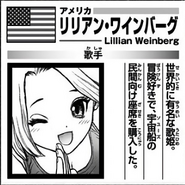 A famous diva whose name is known by the whole world. Her passion in adventuring lead her to reserve a civilian seat on Soyuz.