Hyoga (, Hyōga) is a survivor who was revived by Tsukasa Shishio. Initially an elite member of the Tsukasa Empire since depetrified by Tsukasa, he later becomes an begrudging ally of the Kingdom of Science since his second depetrification by Senku Ishigami.

Hyoga is a tall and fairly built man with light colored hair. For unknown reasons, he is seen squinting most of the time.

He wears bird feathers around his neck, brown gloves, and a black mask covering his nose and mouth because of his terrible de-petrification scar.

Upon his second revival by Senku, the scar on his mouth was completely healed. 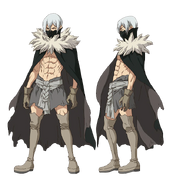 Hyoga has an easy going attitude towards everything. Even in situation that do not work in his favor, he still remains calm. When Gen betrayed him, Hyoga did not seem bothered by it even though his weapons were destroyed mid-battle. While he claims to share the same values as Tsukasa when it comes to only reviving the young and creating a community where no one takes from others, Hyoga himself is an elitist who believes in social darwinism. He categorizes humans as either enlightened (or strong) and unenlightened (or weak). He believes that the "brainless incompetent masses" should not be allowed to live and that only those who excel should be allowed to live. While he does follow a form of social darwinism, he does not believe it is only the physically strong who should survive, as he wanted Senku to join him in his endeavors and become the strongest duo, indicating he respected Senku's intelligence and understood his capabilities. He is very manipulative and cunning, managing to hide his desire to murder Tsukasa and usurp his title as strongest primate by working alongside him until he found a weakness. He seems to be observant, managing to instantly tell that Kinro has bad eyesight simply from seeing Kinro squint. He is cruel, merciless, and uncaring, having murdered Tsukasa right after he reunited with his sister as she became a weakness and he knew Tsukasa would do anything to protect her. Even before that, when he chased Senku and his friends, he and his troops reached an area full of sulfur gas. He kicks his subordinates down into the ground where the sulfur was to "test" and see how dangerous the sulfur was, not caring for their lives. When Tsukasa laments their deaths and names them, Hyoga does not even show a hint of remembering who they were until Tsukasa pointed out they were the ones who died by the sulfur gas. He had earlier shown contempt for his underlings, referring to them as mush brains and frequently insulting them and considered them little more than disposable pawns. He tends to refer to things as being done "properly" or not.

Despite his lack of care for those who he deems "useless" or those who oppose him along with having a strong Darwinist belief in only the strongest deserving to live, he does have a few good qualities. He genuinely respects those who he feels does things "properly." He recognized Kinro's strategy of staying onto the bridge as the number of Tsukasa's forces were disadvantageous and fighting on the bridge would force the battle to be one on one. Similarly, he genuinely respects Homura and puts complete faith in her abilities, referring to her as the only underling who did things "properly." Also, he deeply respected Senku and wanted him on his side enough so that even when Senku refused, rather than kill him, he wanted to torture Senku into agreeing. Later, by chapter 132, he has softened his view so that rather than outright eliminate the statues of the people he deems "worthless," he would simply let them stay statues. In addition, he agrees to side with Senku rather than Mozu because he realized Mozu was an unworthy untrustworthy harem seeker who only valued beauitful women and not people based on strength abilities or intelligence. He even places faith in science and Senku, and his faith is well placed.

After his third release from petrification, Hyoga has become a loyal member to the Kingdom of Science. He also requested that Homura and Mozu be freed to seal his allegiance. He even appeared to make bygones with Tsukasa after the latter wanted him to help with training.

Hyoga is one of the strongest characters in series, as seen when he faced off against 10 other men and easily defeated them in a few seconds.

He was able to take on Magma, Kohaku, and Kinro; the strongest three fighters in the Ishigami Village, and was able to stand his ground until his rigged weapon fell apart.[1] Hyoga is also shown to be proficient in using his kudayari (a type of spear that has its shaft go through a hollow tube that allowed the spear to be twisted while thrusting). However, he has stated his power is essentially a wildcard, as if he does not have his preferred type of spear, his fighting ability drops significantly. This is shown when he barely held his own in a fight against Mozu with a regular spear, but easily defeated him when he acquired a kudayari spear.

Hyoga is a tactical genius who knows how to manipulate his own companions as a distraction while sending Homura to set fire to the houses of Ishigami Village to reduce their resources. He is an analytical man who can recognize with one attack who was the strongest among the warriors of Ishigami village even though he had received the information from Gen after finding out.

Hyoga is a spear-handling master, using his Kudayari spear, he uses the Kan style that allows him to strike out at fast and irregular tormentor attacks that allow him to fight three of Ishigami Village's strongest fighters even though they had metal katanas, overwhelming them with the same until it broke.

Hyoga's stats, according to Volume 6

Kudayari: A special Kan-style boom that has its shaft pass through a hollow tube that allows the boom to be twisted as it pushes into the shape of a full moon as it spins, allowing uneven erratic attacks to increase or decrease its range. During his battle with Mozu, his weapon is further upgraded by Senku using a hollow bamboo tube and a lubricant inside it, allowing Hyoga to defeat Mozu due to the spear's unmatched speed and force.

Retrieved from "https://dr-stone.fandom.com/wiki/Hyoga?oldid=19219"
Community content is available under CC-BY-SA unless otherwise noted.