Homura Momiji (ほむら, Momiji Homura) is a minor antagonist in Dr. Stone. She acts as the right-hand woman of Hyoga in Tsukasa's army. Along with Hyoga, she eventually becomes a member of the Kingdom of Science.

Homura is a very short and slim-but-curvaceous young woman with long, pink hair. She has sharp red eyes and small pink eyebrows, and she's usually expressionless. She wears a fairly elaborate lacy pink dress with a white fur trim that is split into three segments beginning just below her waist, exposing her thighs. On her head she wears a feathered and ruffled headpiece, while she wears pink thigh high boots that have a somewhat feathery design at the top. Homura's petrification scar is located on her leg.

Following her second revival, her scar has disappeared. 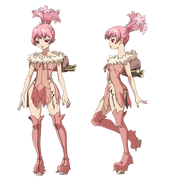 Not much is shown of her personality. However, she has shown strong loyalty towards Hyoga to whom she has been implied to have romantic feelings for. She will complete her task regardless of how arduous it is, such as watching over the Ishigami Village by herself. She is cautious, observant, and intelligent, managing to remember the names and faces of all the villagers during her lookout. When she noticed Chrome, Magma and Gen were gone, she was able to quickly figure out since Gen (who had no physical strength or scientific knowledge) went with them that it meant he would be involved with negotiations and that the three were heading to the Tsukasa Empire. She also demonstrated caution when Senku offered her cotton candy, though relented and ate some.

She proves to hold great intelligence as she is hard to trick or track, managing to notice the tungsten Senku smeared on her to track her and washing it off along with trying to tire Kohaku out by talking while she was chasing her so she would run out of breath. She often maintains a cool composure, rarely getting flustered even when captured or held hostage. She is rather competent and can be merciless like Hyoga, at one point managing to burn the entire Ishigami Village while Hyoga and his forces distracted them. However, Senku suggests that she is not fully evil and can be converted to their side with enough effort (though so far it hasn't been successful as she is still loyal to Hyoga).

After Hyoga is revived to teach weapons training, he asks that she be revived as well. Whie she remains loyal to Hyoga, she now also works for the Kingdom of Science as he does.

On a side note, she seems to have a soft spot for sweets, as she ate Senku's cotton candy despite being wary of it and in chapter 155, seemed quite tempted by the sweet smell of vanilla.

Hyoga has great trust in Homura's skills, having made her into his right-hand.

Despite having little physical strength, her speed and gymnastic ability make up for it, making her a difficult opponent to catch.

Like Kohaku, Homura is very fast and agile. She was able to dodge Kohaku's strikes with ease.

Homura has proven to be very intelligent, as she took advantage of Hyoga invading to burn down the Ishigami Village. She was also the first one to notice the danger of poison gas when she was chasing Suika along with Hyoga and the others from the Tsukasa Empire.

She could guess with some of the villagers gone that something was up and tried to report back to Hyoga.

She has proven to be very stealthy, as she spied on the Ishigami Village for months. In this time, she learned the people's names and habits, proving her capabilities.[1]

Homura's stats, according to Volume 8

Before the petrification event, it is known that Homura was a professional gymnast.

While Ishigami Village is busy defending against Hyoga's army, Homura backdoors the village (by swimming) and ignites it on fire. Hyoga describes her as his right-hand man who can do things properly, unlike the rest of his squadron. She then resides with the latter for the remainder of the skirmish.[2]

Senku find out that Homura is still surveying the village after the battle, as demanded by Hyoga. Senku decides to leave her a little treat, fairy floss (or cotton candy), explaining that Homura might feel lonely. Although Homura was hesitant, she nonetheless eats the snack, which is so delicious that she briefly reminisces on the past.[3]

The problem of Homura's surveillance is still present when Senku tries to deliver a cellphone to Taiju and Yuzuriha. In order to execute their plan, Senku creates a distraction (detonating gas) so that Magma, Chrome and Gen can deliver the cellphone. Kohaku goes after her but Homura uses her gymnastics to evade her. She is then caught off-guard by Senku using a flash bulb. She is then pinned down by Senku, but because he has low strength breaks free. Now free, she notices the villagers watching, shocking them with her surveillance and realizes some are missing. Realizing they are up to something, she decides to chase after them. [4]

Senku uses black jewel powder to track Homura but notices it. Gen Asagiri knows that Homura is after them and uses a trick to trap her with a pincer attack. Using morse code, Senku tells Gen "Since Homura started tailing us fist now with the cellphone to transmit our positional data we can see the lay-out of all the game pieces." She locates Gen's group and hears them discuss radio waves before realizing they have a phone. She climbs to destroy it but Magma and Kinro cuts the tree and she starts to fall. As she does, she believes she will die but Kohaku catches her and she is captured.[5]

Homura is liberated by Yo Uei after he found the village and she promises him benefits.[6]

Homura destroyed the Cave of Miracles, at Hyoga's behest.

When Hyoga is defeated, she is angry and tries to attack Senku but is held back by Magma, Kohaku, Kinro, Ginro, and Ukyo. She is then captured and placed in a cage near Hyoga's, something she doesn't mind. [7]

A year after the Stone Wars, she is shown to still be a prisoner along with Hyoga. The pair are forced to come with Senku and his team as extra muscle.

She is petrified by Kirisame off-screen along with Hyoga.

Homura is subsequently revived by Hyoga as part of a condition for training the Kingdom of Science's fighters.[8]

She selected to be the ships navigator were doing her work she catches sight of the American continent. Homura reports this to the ship, who get excited.[9]

When the Perseus arrives in San Francisco, the warrior team follows the exploration crew. Soon alligators attack, though Homura and the other warriors defeat the beasts, they soon use the Alligator meat to restock on supplies. Homura is exceptionally pleased with the hamburgers that François made from them. [10]

Homura is later seen when Minami Hokutozai tries to contact Xeno for a truce.

She is seen tempted by the sweet smell of ice cream. [11]

Retrieved from "https://dr-stone.fandom.com/wiki/Homura_Momiji?oldid=24626"
Community content is available under CC-BY-SA unless otherwise noted.