View source
watch 02:56
Doctor Strange in The Multiverse o Madness - The Loop
Do you like this video?
Play Sound

Rachel Robinson
Darya Nikitina (ダリヤ ・ ニキーチナ, Dariya Nikīchina) was a character in the manga Dr. Stone. She was a doctor on board the International Space Station (ISS) alongside her husband, Yakov Nikitin. While in space, she witnessed the petrification of all human life on Earth's surface from the ISS.[2]

Darya had short, blond hair similar to a bowl cut terminating on downward spikes on her forehead. She had large lavender eyes and eyebrows that were just a thin arched line, full lips and pale skin. Her face was thin with somewhat puffy cheeks.[2] Her figure was moderately curvy.

Upon introduction she wore pants with velcro strips as it's typical for the ISS crew, and a pale blue polo shirt, with the collar unbuttoned. After living on Treasure Island for some time, Darya grew her hair out and her clothes became tattered, also wearing a long skirt instead.

Darya has been shown to be quite aggressive. She is very protective of her research, considering them like her babies.

Although she would occasioanlly make fun of her husband, she was highly supportive of him, and would cheer for him when he stepped forward to take a leading position. She was otherwise playful and teasing, often joking about being the one granting the crew of the ISS with the permission to breathe oxygen.

Other than her research, she was not very attached to personal items, and was happy to hand over her wedding ring, so its diamond could be used to cut a record made of glass.

She was also quick to act when it came to rescuing her friends, being fearless to the risks involved. It was her who pushed for a second emergency landing with the Soyuz capsule to rescue Shamil, Connie and Lillian when their capsule landed on the open ocean and tipped over leaving the hatch under water. Later on, she would also venture out to sea with Yakov hoping to reach the mainland and find medicine to treat Connie's pneumonia; they were never seen again.

Kohaku took plenty from her personality far down the family tree, including her habit of making a '3' shape with her upper lips which was mostly shown in the reboot.

Darya is first seen greeting Byakuya, new astronaut. Their conversation is interrupted by Lillian who acts as a condescending diva and startles her husband, only for the ruse to be broken by Byakuya's burst of laughter. Later on, Darya and Byakuya playfully set the music in the spacecraft to only play Lillian's songs, much to the latter's embarassment.

While on the ISS, she witnesses the huge beam of light engulfing the earth and is consequently shocked to see all of humanity turned to statues.[2]

Once Shamil, Connie and Lillian land on ocean instead of ground, Darya assures them they have enough oxygen supply for 9 hours. Shamil then replies that this time is their limit on staying inside the vessel. Darya then proposes that Byakuya, Yakov and her land as well and rescue them by boat. Yakov argues that the boat will be nearly impossible to acquire, with Byakuya saying that they will make a raft and swim for miles if they need to.

3 years later, she is present at Shamil and Connie's wedding along with the rest of her crew members, her husband and her children.[3]

She is last seen offering to go to mainland in order to get antibiotics for Connie, who has contracted pneumonia. Before she goes, she asks Byakuya and Lillian to take care of their children. Darya and her husband were lost at sea looking for a cure.[4]

When Byakuya decides to make a record, she gives him her wedding ring to use its diamond to cut the record.

Yakov was her husband[2] and her lab partner when working on board the International Space Station.

The two were colleagues on the ISS and got along well. Eventually, they returned to Earth together and founded Ishigami village. He became the custodian of her and Yakov's children when they were lost at sea in an attempt to find antibiotics on the mainland.

She was with Connie on the ISS before Byakuya and the others arrived.

She and Yakov were lost at sea trying to find antibiotics for her.

Upon the arrival of Shamil, Lillian, and Byakuya on the ISS, Lillian and Darya became friends, having enjoyed mutually teasing Darya's husband, Yakov. Upon returning to Earth, the two remained close as Darya and Yakov settled down and had children of their own. They helped in Byakuya's attempt to give message for his son in the future. Eventually, Lillian became the caretaker of her and Yakov's children after they were lost at sea and died while attempting to make it to the mainland in search of antibiotics.

Shamil was Darya's coworker aboard the International Space Station. 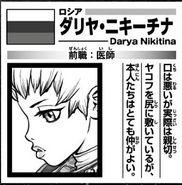 Hidden behind her sharp tongue is her gentle personality. While it seemed that she is kept under the thumb of her husband, Yakov, their relation is actually very close and intimate.