This article is a stub. You can help the Dr. Stone Wiki by expanding it.

Connie Lee (コニー ・リー, Konī Rī) is a character in the manga Dr. Stone. Connie was an American astronaut aboard the International Space Station (ISS) alongside cosmonauts Darya Nikitina and Yakov Nikitin. She also witnessed the petrification of all human life on Earth's surface from the ISS.

She is one of 6 humans to avoid the petrification of all human life on Earth's surface due to being on the ISS at the time. She, Lillian, and Shamil are launched to the surface, but end up trapped in the ocean and are later saved by Byakuya.

Three years after setting foot on Earth, Connie and Shamil get married to each other.

She later passes away after contracting pneumonia. 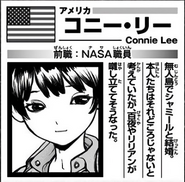 Married to Shamil while they are stranded on a deserted island. Both of them actually felt that it was not a proper time and place for a marriage, but both of them kept being mocked and pestered for it by Byakuya and Lilian.
Add a photo to this gallery

Retrieved from "https://dr-stone.fandom.com/wiki/Connie_Lee?oldid=16610"
Community content is available under CC-BY-SA unless otherwise noted.