Byakuya Ishigami (, Ishigami Byakuya) was Senku Ishigami's adoptive father.[3] He was an astronaut residing on the International Space Station in space when the mass-petrification on Earth's surface occurred. 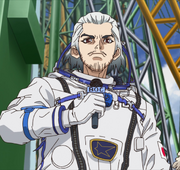 As a middle aged man, Byakuya grew his hair just above the nape of his neck and has a buzz-cut beard and mustache. His hair is white with dark tips, and his eyes are brown, similar to Senku.

During his time on Treasure Island, he adopted to wearing his former astronaut uniform as a cloak.

Before he died of old age while panning for metals, his appearance greatly resembled a much taller version of Kaseki with the exception of not being bald. Most noticeably the beard, facial features, and overall build.

Byakuya was a very supportive and caring father, who loved his son Senku. He went as far as selling his car to give Senku the materials he needed to pursue his passion for science. He was a caring person who was willing to work hard in order to give Senku a great future.

Byakuya was a kind, playful, and mischievous man who always found a way to amuse himself and keep things lighthearted, no matter the stakes. He was a firm believer in fun and levity being crucial to humanity's survival. He was a courageous man who did whatever he could to help other people, always finding something to do with his talents and skills.

His sense of humor could be somewhat dark, but unfailingly, Byakuya would always shed light on what were otherwise heartbreaking circumstances. His unbreakable will allowed him to withstand the loss of his friends, his son, and his world, something that very few people could do. This unbreakable resolve was something that he passed down to his son, along with a lack of regard for formality or decorum, preferring to be honest, earnest, yet never failing to be kind to others.

A teacher to the end, he sent his son a coded message in The Hundred Tales passed down to his descendants in Ishigami Village, knowing that Senku would be able to discover the record that was placed inside his grave marker. During the recording, he made sure that Senku and whoever was with him knew about the amazing things of modern time. Byakuya also gave lessons to the children of his former colleagues that would pass down to new generations.

Byakuya was charming, his belief in the power of fun to sustain humanity catching on to everyone he met. His strength of spirit caused him to become a natural leader, inspiring the people he met, and in turn being inspired by others. Ultimately, Byakuya seemed to embody the spark of humanity's best traits: honor, hope, compassion, curiosity, adaptability, and daring. 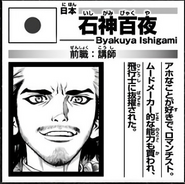 A romanticist who loves to fool around. His excellent ability as a mood maker made him chosen as one of the astronauts.